Bad ideas continue to thrive on social media. After news was released last week that the US government was going to issue stimulus checks to families to help provide economic support during the ongoing Covid-19 Pandemic shutdown, a snarky updated version of the Burning IVF lab scenario began making the rounds in the form of a meme. Similar to the burning IVF lab scenario, the meme provides pro-life advocates with a conundrum: Are we willing to demand that additional stimulus checks of say, $500 be given to pregnant women on behalf of their unborn children? If not, then maybe pro-lifers don’t seriously believe that the unborn are fully human like born children are.

This is a lazy attempt to take the pro-life position to it’s logical end. In argumentation, this is usually a good move, provided it is conducted with intellectual honesty. In roughly every case, memes tend to avoid doing this. And the stimulus check scenario is no exception.

Setting aside for the moment that this ignores how many pro-lifers would answer the question (I personally would support such a measure as part of the ongoing crisis response) the problems with the question are multiple. And since ridiculous viral memes (and even more ignorant arguments) tend to be repeated without much thought, it’s worth taking the time to adequately and reasonably respond.

For one, the behavior of pro-lifers individually or as a whole demonstrates absolutely nothing about the nature of unborn human life. Let’s stipulate for the sake of discussion that some pro-lifers are inconsistent in how they live out their ethical convictions. This doesn’t prove anything helpful for the abortion advocate. It simply means that some pro-lifers may not have clearly thought about what it means to act as if the unborn are full members of the human family. This tells us nothing about whether or not the unborn are in fact human beings.

Additionally, there is a much more simple explanation for why someone might not want to give a stimulus check for an unborn child. Suppose the government were giving out checks to families, but gives more money to parents of newborns than to parents of adolescents. Can we reasonably conclude that those who advocated for the provision of stimulus checks must doubt that adolescents are fully human? Anyone who would answer “Yes” needs their head examined. A newborn has different needs than an adolescent. Diapers, formula, medical examinations, greater responsibility on the part of parents; these needs can dictate the amount of resources necessary to adequately take care of their newborn baby. Even the need for physical affection can be different. For adolescent children, affection by parents is a must, but for newborn babies, affection through touch, holding, and caressing can sometimes mean the difference between life and death.

Similarly, unborn human beings have needs that differ from born human beings; needs that are met differently by their mothers. A woman’s body is uniquely oriented to provide the care and support her unborn son or daughter needs during this period of their life. However, because unborn children will often differ in their specific needs before they are born than they will after birth, it doesn’t mean that treating them differently in regards to contingent matters should lead us to conclude they are not human like the rest of us. Just because the unborn differ from more mature members of the human family in a number of ways in this developmental stage does not mean they are so different that they should be excluded from membership in that family, and the fundamental obligations that membership bestows upon us. We still may not take their lives outright, even if we treat them differently on matters that are not all that important.

If they don’t see the unborn as full members of the human family, then they need to defend that point. The pro-life position argues that abortion is the unjust taking of human life, so abortion advcates don’t get to be let off the hook because they share silly memes. The pro-lifer might have to answer why she opposes giving a $500 check on behalf of an unborn human; but it is the pro-choice advocate who has to explain why it would be permissible for the same mother to seek out someone to end the life of the same exact unborn human being.

Nonsense memes and ridiculous scenarios don’t take the place of solid arguments. Instead, they allow people to remain lazy and ignorant of the issues that really matter. 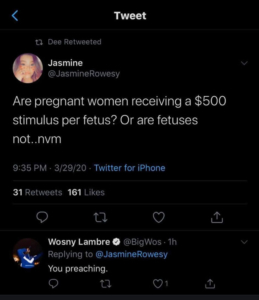 About the Author: Nathan Apodaca

Nathan is a regular contributor for the Human Defense Initiative. He has also written or is currently writing for the Life Training Institute, Campus Reform, Let Them Live, and has been featured on the Daily Wire.